Necrosis is a central pathophysiological driver of two major aspects during solid organ transplantation. Firstly, it directly results in the loss of function of tubular cells, resulting in organ dysfunction. This process is mediated predominantly by ferroptosis. In parallel, vascular damage of peritubular capillaries contributes to damage. Endothelial cells contribute to organ dysfunction through death by necroptosis. Secondly, necrotic cells release immunogenic debris and pro-inflammatory cytokines to stimulate the immune system. We hypothesize that antibody-mediated rejection, a paramount clinical mediator of graft loss, may be triggered by pathways of regulated necrosis, a potentially druggable process! 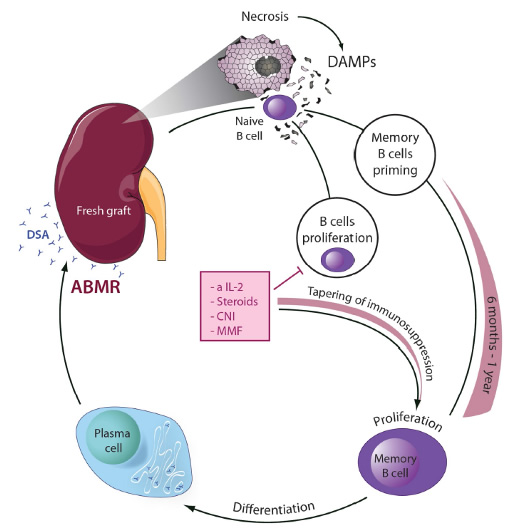 Upon transplantation of damaged (e.g. marginal) organs, massive amount of necrotic debris is exposed to the immune system, e.g. naïve recipient B cells. DAMPs and cytokines, during the very first passage through the graft, are potently primed similar to a vaccination against the donor epitopes. Like a SARS-CoV2 vaccine, this process may be effective in the presence of immunosuppression. Once immunosuppression is tapered, proliferative B cells may differentiate to plasma cells during the first year or later. Such plasma cells could produce de novo donor specific antibodies and potentially mediate ABMR. This model suggests that early interference with regulated necrosis possesses the capacity to prevent memory B cell priming and ABMR. Cell death inhibiting agents, e.g. small molecules added to the machine perfusate, are predicted to prevent ABMR. Find the PubMed link to our publications regarding transplantation here. We refer to the idea that necrotic cells drive a specific immune response as necroinflammation. Recently, we generated Nec-1f, a combined inhibitor of necroptosis and ferroptosis.